How to use Incremental Backups

As we have had several requests for a guide on how to use Incremental Backups, we have put together a handy blog that will take you through each of the necessary steps.

There are three ways to take an incremental backup:

So if you don’t have a backup already then take a full manual backup using the blue backup now button.

Once you have your full backup you can now add increments to it. This can be done by using the action link under the backup now button, by pressing the “Add changed files (incremental backup)…” Link. It will open the following modal: 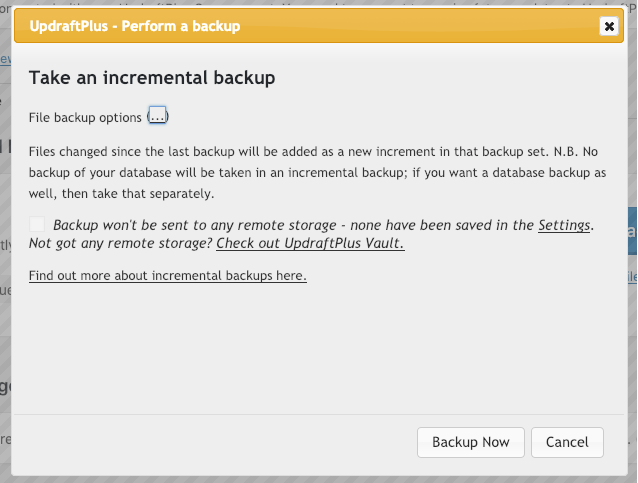 Note that if you don’t have a suitable backup to add increments to then that link will be disabled.

With this modal open you can select the backup now button to take an increment of your saved backup entities (the entities you have set to backup in your UpdraftPlus settings).

If you want to only take a plugin increment for example then press the “…” After the “file backup options” this will open the advanced options. 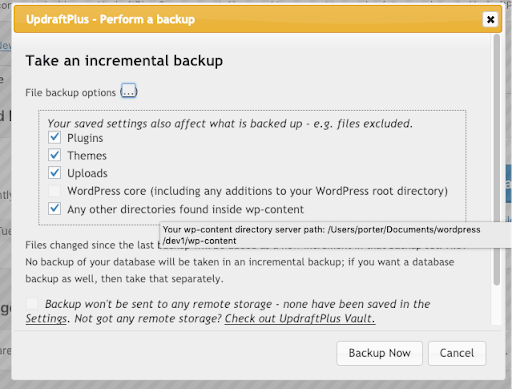 Select what you want to backup (note that you can only add an entity increment if a full backup of that entity exists).

Once happy press the backup now button and UpdraftPlus will do the rest.

You can confirm that your increment has been taken by looking at the existing backups table:

You can see when the latest increment was taken, if you hover over that a pop up will also tell you what other increments exist in that backup.

To take a scheduled incremental backup you just have to set how often you would like the backup to take place, save your settings and UpdraftPlus takes care of the rest.

First go to your UpdraftPlus settings and to the files backup schedule.

If your schedule is set to manual, you will not be able to schedule a incremental backup so first set how often you want your files backup to run.

With the files backup set to daily (or anything you want) it will now allow you to schedule an incremental backup.

In this example as we choose daily for the files backup we can select an increment to take place up to every 12 hours.

In this example I have my files backup to take place at 12am then every hour.

Now we have the schedule setup don’t forget to save your settings, then just wait for UpdraftPlus to do the rest.

Again you can check your backups in the existing backups section.

You can also take a incremental backup via WP_CLI

To do this first make sure you already have a backup. This can be done using the following command: wp updraftplus backup

Note command may differ depending on how you have WP_CLI setup.

Now we have a full backup we can take an incremental backup by adding the incremental argument to the above command: wp updraftplus backup –incremental

Using that command will take an incremental backup and add it to the latest backup.

For example if our full backup was at 12am and we have increments every hour at 1am, 2am, 3am and so on, when we go to restore we can decide that we want to restore up to 2am.

What this means is that UpdraftPlus will first restore the full backup that was taken at 12am and will then restore the 1am backup, before finally restoring the 2am backup.

To start a restore go to your existing backups and find your incremental backup.

Press the restore button and this modal will pop up: 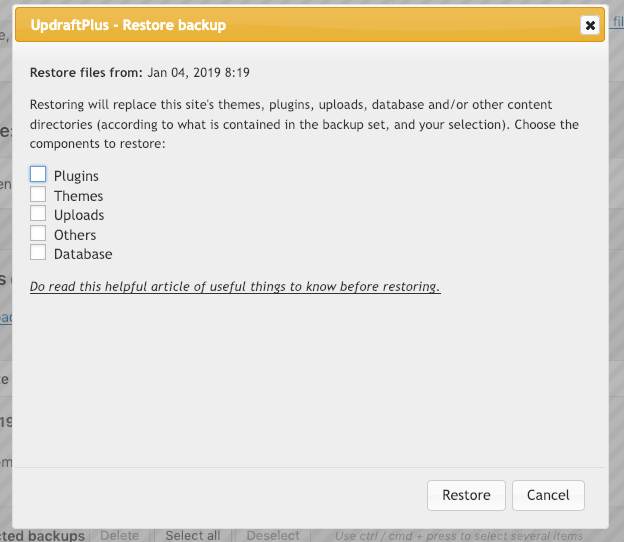 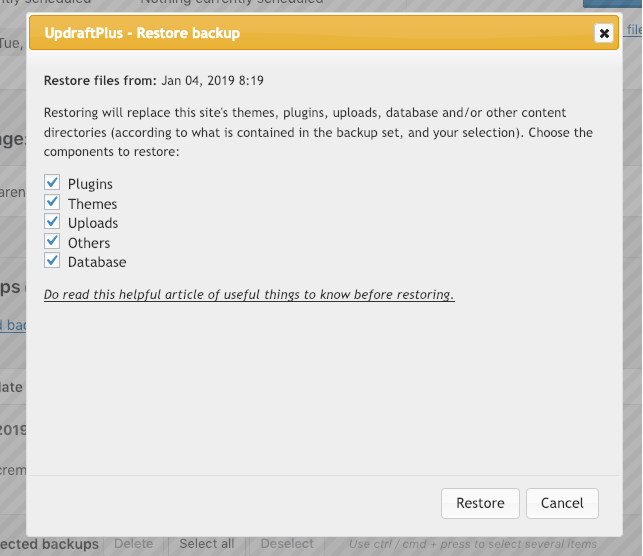 Select the entities you want to restore. Then press the restore button.

UpdraftPlus will then do the rest.

The post How to use Incremental Backups appeared first on UpdraftPlus. UpdraftPlus – Backup, restore and migration plugin for WordPress.